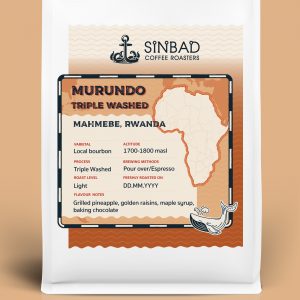 Founder and chairperson Furaha Umwizeye Teuscher has established herself as one of the region’s top producers under the brand Kivu Belt. She’s recruited an exceptional independent quality control team called Ikawa House led by Laetitia Mukandahiro and Uzziel Habimana, two of the countries’ most gifted and experienced cuppers with a combined 30+ years of experience and stints at basically every major specialty export office.

The Kivu Belt estate is a rarity in Rwanda, where smallholder farming is the norm. Under Umwizeye’s leadership, and the guidance of her farm manager Gaspard Nsengimana, Kivu Belt has planted 90,000 coffee trees on their estate, which now employ more than 400 people during harvest months and is a kind of coffee vocational school for local smallholders interested in improving their farming. Kivu Belt has also acquired two washing stations, Murundo and Jarama, which process coffee from the company’s estates as well as that of more than 500 smallholders in the region, offering quality premiums and training programs for participating farming families.

The Nyamasheke district in Rwanda is gifted in terroir. The cool, humid climates of both Lake Kivu and the Nyungwe Forest National Park keep groundwater abundant throughout the uniquely hilly region. Kivu itself is part of the East African Rift whose consistent drift creates volcanic seepage from the lake’s bottom and enriches the surrounding soils. Coffees from this region are often jammier and heavier than in the rest of the country. Murundo’s coffees in particular are full of complex sugars, currant-like acids, blackberry and spice flavours, and round, soft textures.

This lot for example is a “People’s Farm” outturn, another term for smallholder coffee growers and the households they support. It is syrupy sweet, and is quite a contrast to other Rwandan coffees which tend to be more citrusy and herbal.