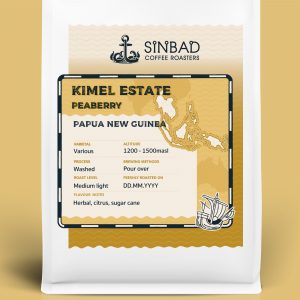 As one of our staples, the PNG Kimel Peaberry is back in stock!

The Kimel plantation was first established in 1974 by an Australian named Bobby Gibbs and is now being co-operatively owned by the indigenous people of the Opais tribe. The estate is located in the Western Highlands in the Wahgi Valley approximately 50 Km south of Mount Hagen, near a small town called Banz.  It derived its name from its close proximity with the Kimel river. The Western Highlands area is the largest coffee producing province in Papua New Guinea (PNG), with the Wahgi valley and the Dei Council, in particular, which the estate boarders, producing some of the finest coffees in the country.

The benefit of being close to a natural water source is that the estate has access to good clean water for the processing of its crop, which is a pre-requisite along with sound husbandry and dedicated management to continually create quality coffees. The estate’s management also implements some ecology friendly policies with regard to environmental issues, such as the recycling of pulp, which is returned to the fields as organic fertilizer, and the recycling of water used during the wet processing. The cultivation is conducted under shade trees, like Albizias and Gravilleas. Many coffee experts think a peaberry (the coffee cherry produces only a single seed instead of the normal two) has a more concentrated coffee essence–basically bringing more flavor per bean to the cup.  Being slightly rounded instead of flat on one side, the beans tend to agitate better during roasting, giving you a more uniform roast.