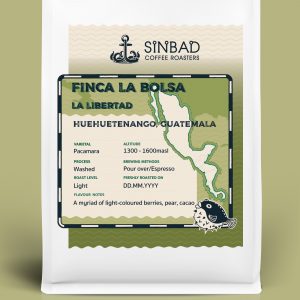 The Vides family’s story in coffee began 3 generations ago in 1958, when Jorge Vides Molina, a prominent doctor, founded Finca la Bolsa as a passion project.

While Don Jorge passed away in 1995, his daughter María Elena and her son Renardo Ovalle took over management. In 2002 they submitted coffee from their farm to the Cup of Excellence, its first year in Guatemala, and took home the prize for second place. With the potential to produce super-specialty microlots suddenly exposed, the farms underwent an overhaul in terms of production style, cupping day lots and individual varieties to separate quality and cultivating direct relationships with roasters and coffee buyers.

Finca La Bolsa is the family’s original farm, first planted by Don Jorge. A little lower in elevation than its companion farms, this hasn’t stifled its ability to produce exceptional coffee. The 108 hectare farm also is in possession of a Rainforest Alliance certification and is a member of the Women in Coffee Association, as the farm is overseen personally by Doña María Elena. Two years ago, they added Pacamara and Gesha to the more traditional varieties growing on La Bolsa.

This lot from La Bolsa is quite complex in flavour profile, a balancing act of citric, malic, and tartaric fruit flavors and a fudgy complexion that could be described as “comforting.” It is one of those coffees that are easy to drink and yet interesting, Central American coffee at its finest.